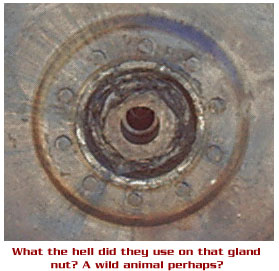 Wife and I went to a beautiful suburb of Philadelphia today to pick up a new engine and transmission for the Square. The Transmission is going up to my parents’ house in New Hampshire until I (hopefully never) need it, or until we get our house another year or so from now. The transmission is an automatic out of a marina blue 71, just like mine. The engine was out of the same car, which had been converted to carbs (the pain!)… I’ll have to check the engine number and see if it’s at all close to mine. The car had been abandoned on the streets of Philly and was sold by the city for spare parts because it had no title. At least that’s what the guy who bought it told me. I guess you can’t get a title for an abandoned car? Anyway, it looks like it had been left there because the pulley had sheared off the crankshaft. Yipes. It also looks like someone had a go-around with the gland nut on the other side. I guess I’ll start tearing this one apart on my vacation next week. Hopefully just about everything is good inside and I can rebuild it to get a few more thousand miles from it. I’m going to be doing this on my deck, so it should be lots of fun. (ugh) When we get our house I will, of course, be revisiting this, but hopefully this will get me going until then. Will probably need a new crankshaft. Once I replace this motor, I will probably disassemble the one currently in the car to see what’s going on with that bad cylinder (I imagine I will not have to go far to find out). What an adventure this is turning out to be!