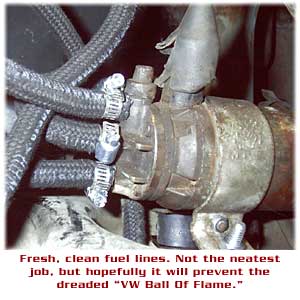 Rained all day yesterday, but I had to work a full day anyway. Sun was supposed to come out today, but it didn’t. Still, it didn’t rain, so I took the opportunity to do an oil and filter change on the wife’s Toyota, which we’re giving away to her niece on Monday, and did the same to my Jetta, which was at 5000 miles since the last one. Decided to use semi-synthetic instead of pure synth this time. Added a pint of Valvoline high-mileage additive and the car seems a bit better for it. Strange stuff. Real gooey. I have my doubts that it really does anything but thicken the viscosity of the oil. Whatever… With 123K miles, the Jetta is getting up there in age, so I’m at the point where I’m not worried about trying these “restorative” additives that are probably doing more to my wallet than my car.

Finally finished the work on the fuel lines in front of the car. Went to install the rubber bushings that go between the fuel pump and the front beam, and realized that the thread size is larger than the old bushings. A trip to Pep Boys and AutoBarn later and I had the M7 nuts I needed. The weekend is a bad time to go to Pep Boys. The shelves were just about empty of anything I needed. Got back to the car and cleaned up the little fuel muffler, its backing plate and hooked everything up. The only thing that didn’t work out was the location of the fuel filter. I don’t have a bracket that’s supposed to go on top of the fuel pump, so the fuel filter is sort of hanging, resting snugly though against a brake line. I don’t know if this is good or bad, but I doubt it will cause any problems. 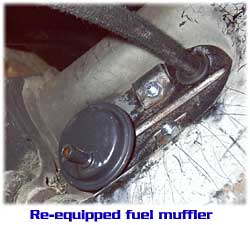 Took the underplate off the master cylinder and what a mess. Both the plate and the MC are just covered in rust. I took the plate home to POR-15 it and the master cylinder will be replaced. I might try to get it rebuilt at a later date. I initially thought it was dry, but when I started loosening one of the brake line fittings, brake fluid started oozing out. I guess this is a good sign as it means there is probably little if any rust in the lines and maybe the brake cylinders are still good as well.

I took the VDO sending unit out of the gas tank as well and the sender came up without its protective case. I finally got to see the extremely fine wires on which the float rides up and down. I can see why they break. They’re about the thickness of a hair. Examined the inside of the gas tank. There’s a little surface rust, but I’m not going to seal it or really worry about it. Hopefully the filters will do their job. Probably not the most prudent thing, but I’m not going to pull that tank unless I have to. Also saw that someone had put a piece of carpet under the fuel filler hose. Great. Probably means it’s leaking like in so many other Type 3’s. Another thing I’ll worry about when the car is actually on the road.