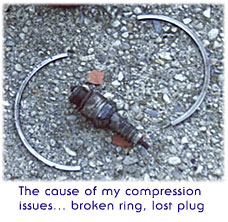 And there you have it. I finally know the cause of my bad compression on number three cylinder. Check out the broken compression ring. When I pulled the cylinder off the engine, the ring fell to the ground, and just like that came the answer to my questions. Also, wedged down between the cooling fins and the engine block was a spark plug someone had lost along the way. Yet another obstruction to airflow. I’m told that this actually happens quite often. I recall I did lose a spark plug socket rubber boot in there, but I think I’d have to think twice about running around town knowing I had a whole plug lost in there.

Over the past couple weeks I painted the engine tin, washed the new cylinders & pistons, and painted the new cylinders with hi-temp POR-15 Black Velvet. I also took that stuff to the muffler and heat exchangers. While I was painting what I imagine is the heat shrouding on the muffler, the smooth black paint made it easier to see the stamping on the shroud. Turns out this is the original exhaust. It was stamped 1971, with a bunch of other words including “Variant.” Also, made in West Germany. I have no idea how this lasted so long. The thing sure looked rusty, but it certainly is not rusted through. Looks like it’s just surface rust. I wonder if this is one of the galvanized muffler’s I’ve heard about? 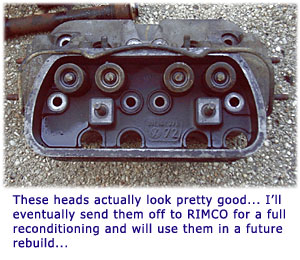 Finally got the pistons off the connecting rods today. Yesterday I stopped at the Home Depot and bought one of those seven-piece propane torch kits. Supposed to come with a flame dispersal tool, a spark-maker (what are those things called? It’s 1am and I’m tired…) and a bunch of other stuff. So I open the box today and it’s got the propane tank and the brass valve and that’s it. So I sat there debating whether or not I trek fifteen minutes over to the Home Depot by my work or just try to find some matches and light the thing and get on with it. My in-laws weren’t home at this point, and there were car parts and engine tin all over the driveway. I would’ve had to have packed up everything and spent the next hour taking care of what amounted to ten bucks. I scrounged around the garage and finally found a grill lighter, lit the torch and heated up the first piston. This was a suggestion from the Type 3 list as well. Earlier in the week I had stopped by the house to see if I could just get the pistons off. One came off, the rest didn’t want to, even with lots of “convincing.” It wasn’t smooth as silk even with the heat, but I’m sure I wouldn’t have been able to get them off without it. Next step is to actually start reassembly! I have to clean up the areas on the case that seal to the cylinders and pushrod tubes. I’d do the whole case, but I don’t want to get any dirt inside the engine. As it is, I figure it will be a good idea to change the oil almost as soon as I get this going. Maybe let it run for a half hour, then change it. Wow. Run… Let it run… I’m getting ahead of myself. I still don’t know what this car sounds like!

Did some work on my “new” website tonight. It’s pretty much just a redesign. I moved my firewall and web server over to a new OpenBSD machine, so I figured I might as well clean some stuff up. I have to say OpenBSD has the best built-in documentation of any open-source OS I’ve used so far.