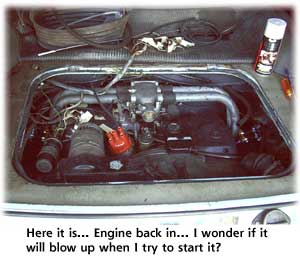 Haven’t written here in a bit… Running behind. Got a lot of work down this past weekend, since the weather was incredibly beautiful and my boss didn’t call me in. I finally secured up the exhaust, heater boxes and everything else and got the engine back in. It was quite a job doing it by myself, but with the help of some bricks, a decent jack from Sears, a lot of patience and a block of wood, I got everything lined up properly and pushed the engine in place. I got the nuts onto the transmission/engine bolts and then readjusted everything, including the engine hanger bolts, before snugging everything up. I still have that one upper bolt on the driver’s side to do though, the one that nearly killed my wrists for good last time. I have no idea how I’m supposed to get a proper torque reading on that one when I can barely get to it.

I still have to hook up the torque converter bolts to the drive plate, and also have to figure out a way to get one clamp on between the right-side heater box and the heat exchanger. Maybe I’ll get a wider clamp. I also need to get some kind of rubber innertube to seal the cooling elbow on the left side of the engine. The one that was there was completely disintegrated. The right one still looks good, even if it is slightly cracked. I also have to get some more tubing to hook up the vacuum connection to the automatic transmission. I forgot to order that, but I did get some other parts overnighted to me so I’ll have them for the weekend — new tin screws, an engine lid seal, bellows clamps, and a couple other small things. Depending on whether or not I forgot anything, I might be trying to start the car by the end of next weekend. That’s a scary thought. Luckily it’s a three-day weekend (Labor Day). Wonder if I’ll have to go in to work at all? Hopefully not. 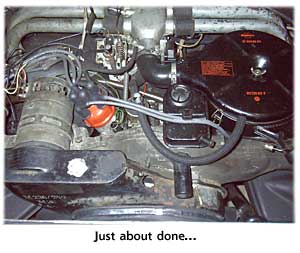 I took Tuesday off to go up to Connecticut and pick up some free Type 3 leftovers. Met a cool guy named Conley who was trying to clean up his garage space. He was more into Type 2’s and “Things” and had ditched his Type 3, so I got a set of four side glass panels, a steering box, a muffler in pretty decent shape, two headlights, a trim ring, two fuel injectors (don’t know if they work), some fuel ring parts, four hubcaps, a license plate bracket… Hmmm… That’s about it… Gave the guy $20 for it all and hauled it away. Got a nice big rubbermaid box in the deal too, and now have a place for my extra set of heads from my car, along with the extra engine tin.

I’ve decided to sell my OEM parcel tray, since I don’t really like it. I’d rather have a clean interior with nothing to hit my feet or knees on. When pushing the brake pedal, I seem to hit the top of the package tray with my sneaker. I dunno… We’ll see. I’ll take some pics of it, maybe remove it, and then post it on the Samba.