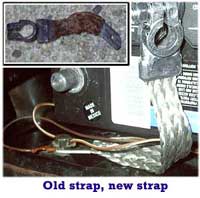 After breaking down on the side of the road the other night, I got pushed home by a kind towtruck driver who took pity on me as I was pushing the car back home. Something’s going on with the electrical system, but I can’t seem to track it down. The generator light stays on when I’m trying to start the car. It happened about a week ago, but after double-checking some connections in the engine compartment and the under the back seat, everything seemed fine. I had to work yesterday (Saturday), but today I had some time this afternoon to go and take care of some of the electrical stuff I knew was bad, and hopefully by process of elimination I’m getting closer to the problem. I started with the battery ground strap, which was in pretty bad shape. After that, I started working on the connections at the voltage regulator, which were an absolute mess as well. Someone had “fixed” one of the wires by twisting it around a hole and had then taped it into place. I took a round connector from the electrical connection kit I got today and soldered it to the wire, then properly attached it to the regulator with 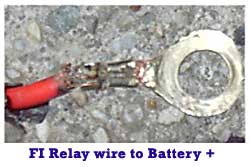 a screw. While I was there, I made sure all the other connections were solid. It was then that I discovered what could possibly have been my fuel pump relay problem. The cable from the relay behind the back seat to the battery positive terminal cable was almost sheared off at the battery side. It could hardly have been carrying any load at all it was so bad. I have to find a connector big enough to go through the bolt on the battery terminal now, and I’ll see if that corrects the fuel pump issue where it’s on all the time. Mind you, I’m not too confident withe the condition of the positive battery connector either, but the car seems to be getting plenty of juice, so I’m not quite as concerned about that for now. When I broke down the other night and realized that one of the starter cables was off and reattached it, it was disconnected a day later. So today I also went through those cables looking for corrosion and tried to tighten up the loose connections. One of the connectors, the one that goes on the top of the starter solenoid, came apart in my hands when I pulled it off the solenoid. It had been cut, and loosely taped together with some electrical tape. I took the boot off the old connector, cut and stripped the wire, then soldered a new female connector onto it. After that, I pushed the boot up and reconnected it. I’m having a hard time reading the electrical diagram on occasion, and I think this wire is only for the diagnostic computer hookup, so it wasn’t really vital anyway. 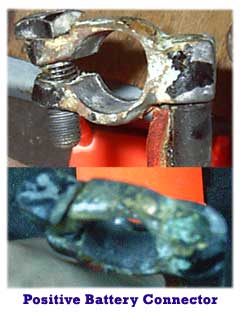 I guess I didn’t mention that the night after I broke down at the gas station, I broke down on the side of the road a few blocks from my in-laws? Well, this is the current problem, the one I’ve described above. I just went back and realized I hadn’t mentioned that. That night, which I believe was Thursday, I replaced the other headlight as well as the rear taillight and decided to drive Wilson home. He wouldn’t have anything to do with that, and conked out on the side of the road. It really should serve me a lesson. I knew there was a lot more work to be done on him, but I just wanted to get to drive him home for a night. I suppose I could’ve broken down a long way from home, and it would’ve been towtruck time again, but luckily I hadn’t gotten far. As much as I want to enjoy driving this time of year, I am trying to be patient and if worse comes to worse, I will have to just wait through the winter. I still have two months or so to figure out what the problem is before it’s turned in for hibernation. I’m still thinking I might actually get a garage here at the apartment over the winter as we only have a few months left on our lease. It might not be a bad investment. The car would be protected for the winter and it would be out of the way if it’s another snowy and icy winter. On the other hand, it would be close by if we got a nice day and I wanted to do some work on it. I guess I’ll wait and see how everything goes.

OK, I just got an e-mail from Jim Adney to the Type 3 list where he mentioned that it’s possible that I have a 1972 wiring harness even though I have a 1971 model car. He’s totally right, and that explains why I was having such a hard time reading the electrical diagrams. The Bentley is actually wrong, as I have a July car and it says that the 1972 wiring harness started with August 1971 cars. I just looked over the diagram a bit and all the wires that I saw today are there. Very good to know that hopefully my next visit with Wilson won’t be quite so frustrating! Actually, the more I think about it, the more I’m realizing that the car not starting at all is so much more preferable to it starting once in a while and then conking out. At least now I stand a better chance of feeling the problem has been fixed once I locate it.