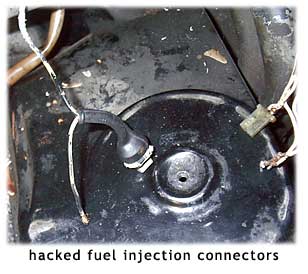 It’s Saturday, almost a month after my last post. Things have been moving slow on the Fastback. Between work and a writing project I’ve been working on with an old friend, I’ve had little time or motivation to get back to work. So it sits in the garage, rear on jack stands. I did finally get the parts in from CIP, and noticed that the battery tray patch panel is WAY shallow. It only extends from about the rear frame where the seatback goes to the floor to where the divider area between where the battery sits and the rear foot area is. I was hoping it extended at least a little into the foot area. I think I’ll have to grab some sheet metal from the Squareback up in NH before I attempt a repair. The actual patch panel seems pretty thick, and is much more solid than I imagined it would be.

I did get started on the FI harness repair. Man, what a hack job that thing was. Check the frayed ends of the wires in the pic. I had to be very careful getting the shrink tubing off the wires. It was too tight to get scissors or clippers in there, so I had to use a sheetrock knife with a new blade, and had to be careful not to cut the wires themselves. Cutting four inches of tubing took me about fifteen minutes. It was brittle as hard plastic. The wires themselves are the same way, probably a result of so many heat/cool cycles over the years. I’m going to have to take my time fixing them as well, since any bending is likely to damage the wires inside the insulation. It’s not going to be fun. I’m half thinking I should just take the engine out of the car for easier access to the wires, but I’ll see if I can avoid that. From what I can tell, the engine is in good condition, so I’d like to just get this thing running and then do the brakes and go through the suspension so I can perhaps get it on the road. With the first snow of the year coming Tuesday though, and the resulting salt on the roads, it looks like I have until Spring to get this all done. That’s fine with me — the wife and I still have two rooms of the house to finish painting and getting situated: our bedroom and a bathroom off the kitchen. They’ve been sitting in painter’s white for over a year now. Time to get to them.

Today’s project though is to start scanning in a couple old Super 8 films I made in college to see if I can make decent AVIs out of them. It’s around 40 degrees out today and the garage isn’t heated. What I think is an arthritis onset in the knuckles of my left index and middle fingers has been particularly bad for the past couple days as well. I’m going to have to get that checked out because it’s been getting worse and worse since the Fall set in. Grand.